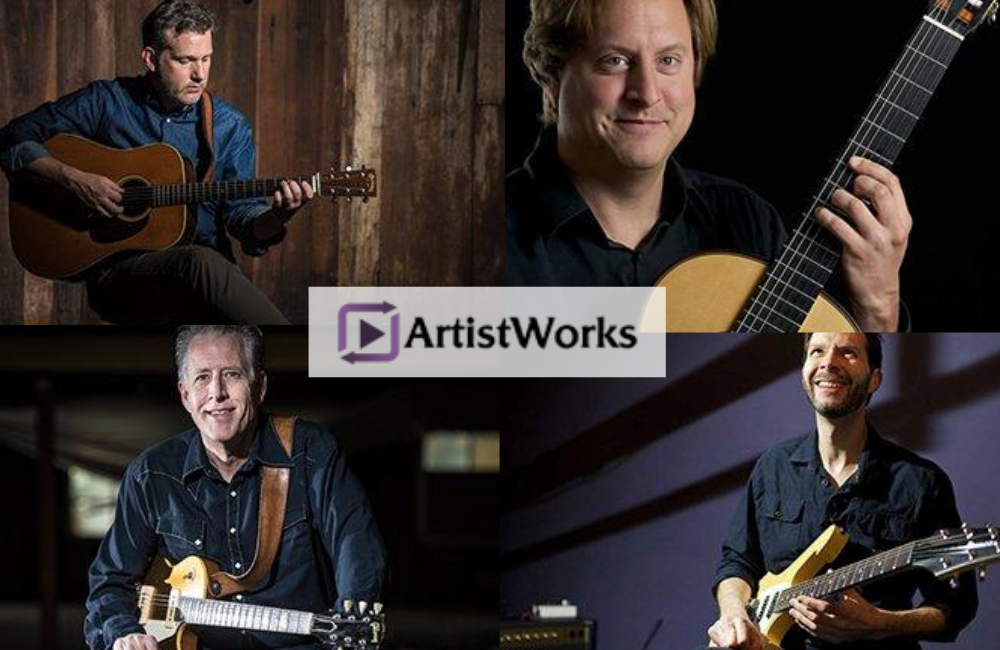 ArtistWorks offers 10 high-quality online guitar courses for beginners, intermediates, and advanced musicians. Skilled lecturers teach how to play acoustic guitar, electric rock and country guitar, fingerstyle jazz guitar, or a classical guitar. Except for the basics, theory, and exercises, you are going to learn specific riffs, songs, and techniques. Due to very experienced instructors, ArtistWorks courses are popular, especially among intermediate and advanced musicians.

Every course contains around 100 video lessons. While learning, you can use looping and slow-motion.

David Butler (Acoustic guitar) is a co-founder of ArtistWorks and experienced guitarist who focused mainly on guitar beginners.

Bryan Sutton (Bluegrass guitar) is a sought-after studio and session player. He recorded and played with Dolly Parton, The Dixie Chicks, or Rhonda Vincent. He’s received IBMA’s ‘Guitarist of the Year’ eight times.

Paul Gilbert (Rock guitar) is a graduate of Guitar Institute of Technology in Los Angeles, who formed a famous band Mr.Big. In his course, you are going to learn his iconic playing techniques and guitar shredding.

Guthrie Trapp (Electric country guitar) has created an interactive country course where you can submit your videos for review.

Keith Wyatt (Online blues guitar lessons) is an experienced guitarist who teaches everything from classic blues to rockabilly.

Jason Vieaux (Classical guitar) is a brilliant guitarist who has recorded 13 albums, including Play which won a Grammy for the best classical instrumental solo in 2015.

Andy Hall (Dobro and lap steel) graduated at Berklee College of Music. Except for his albums, he also performed on dobro with Dolly Parton, Zack Brown, Earl Scruggs, and many others.

Chuck Loeb (Jazz improv guitar) is a guitarist, arranger, and producer. He collaborated with other jazz musicians, we can mention his arrangements for Stan Getz’s band.

ArtistWorks guitar courses are a great option for those who: